It reads like a storyline from a Steven Spielberg production, but it’s exactly what happened at the Sottile Theatre in 2011 when construction crews removed acoustic tiles from the walls during renovation. What they discovered beneath were two classically styled murals hiding behind years of dust and layers of adhesive. 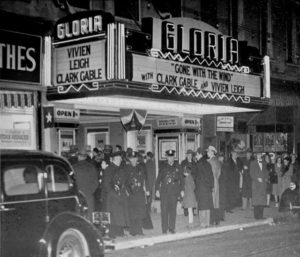 The murals were original to the building and painted by Italian artists from New York City when the theater was built in the 1920s. For years, the pock-marked, yet still beautiful murals have provided a haunting reminder of a bygone era of grand movie palaces. Their discovery also served as a touchstone of the College’s long-standing plans to restore the Sottile to its former glory as a showpiece in Charleston.

The theater opened in 1927 with a showing of Norma Shearer’s After Midnight. The building, originally known as the Gloria, operated as both a vaudeville house and a movie theater. In its heyday, the Gloria was the crown jewel of Albert Sottile’s Pastime Amusement Company. The theater served primarily as a movie house until it closed in 1975. The College purchased the theater in 1976, refurbished the building in 1986, and reopened it in 1990 continuing the theater’s decades-long history as a place to celebrate arts and performance. 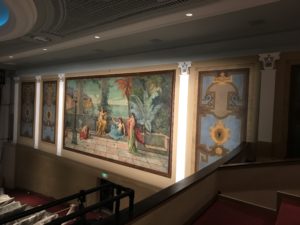 In 2019 work officially began on the restoration of the north and south wall murals with the support of Pastime Amusement Company, on which Mary Ellen Long Way and Joyce Long Darby sit on the board. Way and Darby are the granddaughters of Albert Sottile, who established Pastime Amusement Company and owned many theaters around Charleston in the early 20th century. Work was completed on the murals in 2020, and they await eager patrons to gaze upon their newly restored beauty when the time is right and the Sottile Theatre officially reopens from its closure due to COVID-19.

Known as the “king of Charleston’s motion picture business,” Albert Sottile’s legacy is interwoven with the College in many ways. Not only is the College steward of his Gloria theater, but his family home located a few blocks from King Street is now home to the College’s Division of Institutional Advancement.