Dr. John Covington ’84 and Professor Robert J. Lukey were a couple for nearly 36 years and shared a passion for travel, the arts, healthcare and education. Both were deeply committed to helping others regardless of age, race, religion, origin and sexual orientation or identification. It is in this spirit of giving opportunity to the next generations that Lukey and Covington sought to establish and support scholarships.

The newly established John L. Covington and Robert J. Lukey Endowed Scholarship provides educational access to pre-med students in the School of Sciences and Mathematics. Preference is given to students who wish to follow in Covington’s footsteps and pursue a career in dental medicine. After graduating from CofC, Covington attended the Medical University of South Carolina Dental School and graduated in 1988. He ran the Sexton Dental Clinic in Myrtle Beach until March 2018.

Recipients of the scholarship will have the benefit of meeting and getting to know their benefactor, Robert Lukey, but will only know Covington through the memories and stories Lukey shares of his husband. Covington died in January 2020 after a 15-year battle with scleroderma.

“John always spoke of his College of Charleston years as some of his happiest,” Lukey shares. “He was able to pursue a wide range of interests during his time at the College. For example, although he was a pre-med student, he also took dance classes with Robert Ivey.”

“He found both the College and the city of Charleston liberating; he felt at home here. It was this awareness that motivated me to establish this scholarship at CofC. I hope this opportunity will go to a student whose values reflect an attitude of inclusiveness, charity and tolerance, just like John. He loved helping people.”

Lukey is a graduate of the University of Pretoria, The New School for Social Research in New York and The Citadel. He was the arts and sciences department chair at Johnson and Wales University in Charleston. He was helping run two Charleston restaurants, The Cotton Exchange and Queen Street Seafood Inn, when he met Covington in 1984.

They met at the Farmer’s Daughter restaurant, where Covington worked as a busboy during his final months at the College. Despite an 18-year age difference, they developed a bond that led to many adventures during their nearly four decades together. Ironically, within a year after meeting, they would become co-owners of The Cotton Exchange and its sister restaurant, The Farmer’s Daughter.

Both men believed a meaningful life was about experiences and not about accumulating possessions. They loved to travel, and they enjoyed fine dining and fine wine in equal measure. “We particularly liked traveling to New York to see Broadway shows, go to the ballet and to the opera. Of course, the restaurants were a treat. We traveled all over the world, with at least one or two trips overseas each year and two or three trips a year to New York,” Lukey says.

The couple had no children, but they wished to help foster young people by supporting scholarships to provide educational opportunities. “This scholarship is set up to last into perpetuity as a legacy not only of John, but of our relationship,” Lukey says.

Through establishing the pre-med scholarship and reflecting on the breadth of interests that he and Covington shared, Lukey decided to establish a second scholarship at the College within a few months of finalizing the first. The John Covington and Robert Lukey Performing Arts Endowed Scholarship will assist students in the Master of Arts in Teaching – Performing Arts Program who plan to teach. Preference is for students who have a demonstrated involvement, support or participation in LGBTQ+ activism. 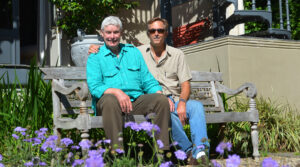 “The arts classroom has become a safe space for so many students who need to be affirmed for who they are. Establishing this scholarship ensures that many future K12 students of our CofC teachers-in-training can find a place where they belong and are encouraged. The legacy of this gift will be immeasurable in all who will benefit from it. As Program Director of the MAT in the Performing Arts I am just so grateful for this very, very needed and thoughtful scholarship,” says Laura Turner, associate professor of Theatre.