The Student Garden, which is sponsored and maintained through the master of science in Environmental and Sustainability Studies Program at the College of Charleston, began a new garden installation in spring 2019 at Stono Preserve: the Hidden Hands Garden. This new installation is a part of an already existing and thriving garden that has been functioning since 2012 and has grown tremendously due to the funding support from the Golden Pearl Foundation.

The Hidden Hands Garden will demonstrate the many techniques, seeds and agricultural methods that were introduced by both African and Native American enslaved peoples. This garden plot will feature multiple raised beds highlighting the difference between sustenance crops and cash crops and demonstrating how the crop varieties have changed over time. In addition, the Hidden Hands Garden will serve as a valuable educational tool for our K-12 programs and for our College of Charleston students and community volunteers. This space presents the opportunity to teach and discuss history, land management, agricultural methods, native species and much more.

The groundbreaking ceremony for the Hidden Hands Garden took place on April 28 and was attended by students, faculty and community members. Annette Watson, director of environmental studies and associate professor of political science, spoke about the history of the land and the peoples who passed through over time. Jim Ward, senior instructor of art and architectural history, shared the importance of local storytelling, cuisine and culture. Volunteers then had the opportunity to start laying mulch paths for the garden and potting seeds. Students are currently constructing the raised beds, bringing the garden space’s plan to life. Lumber and supplies for the raised beds were funded by the Golden Pearl Foundation and are an essential part to making the new garden a reality. 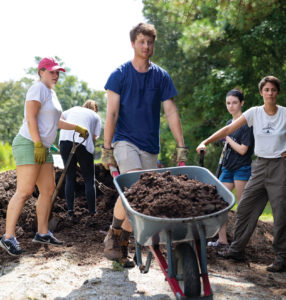 The Golden Pearl Foundation funded another significant improvement to the Student Garden at Stono Preserve last fall – a new deer fence. The 10-foot tall fence encompasses seven acres of the Student Garden, keeping out pesky animals who would frequently eat the produce before students had the chance to harvest. The garden is now thriving due to the added protection, and increased produce yields supply students at the College of Charleston and community members with free fresh organically grown produce.  – Lucy Davis