In 1934, Emmett Robinson ’35 won the College of Charleston’s Robert Worth Bingham Oratorical Contest. An annual tradition dating to 1907, the speech competition, judged by a panel of College faculty, identified the best student rhetorician. Robinson’s winning speech, which celebrates the value of music in our daily lives, continues to ring true today.

“With so many devices to make life less of a drudgery we ignore striving to new heights and lapse into servitude to Common Sense,” he wrote. “Securing the necessities of life so overwhelms us, that we forget to live.”

When he wrote his speech, he was deeply ensconced in the theatre department. He performed in several plays his freshman year – and by the time he was a junior he was directing. One of the bigger successes that year was an al fresco production of Romeo and Juliet. 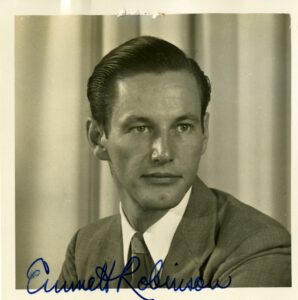 His daughter, Jennet Robinson Alterman, a nonprofit consultant and women’s rights advocate, says many people come up to her and say they’ll never forget her father’s production of Romeo and Juliet at the Cistern. The play, which he adapted, designed and directed, was presented as part of the sesquicentennial anniversary of the College’s founding.

In recognition of his contributions to theatre at the College and in Charleston, several of his colleagues established the Emmett Robinson Memorial Scholarship in Theatre to honor a rising senior theatre major with a distinguished record of leadership and artistry.

“As a student, as an artist and as a member of the Charleston community, Emmett Robinson was the embodiment of a liberal arts educated theatre person,” says Todd McNerney, professor of theatre and associate dean of the School of the Arts. “He was an actor with immense talent, a director and artistic director of even greater, and a designer of even greater still.  As such, the scholarship in his name has come to recognize the very best of our senior theatre majors — individuals who emulate Emmett’s commitment to the totality of theatrical art and to superior effort across that totality. There is no higher honor for our theatre majors than to be named the Emmett Robinson Scholar.”

One of Robinson’s students, Brent Laing ’83, senior instructor in the Department of Theatre and Dance, concurs. “Emmett tried to impress upon us that it takes a team working in concert with each other to produce theater. He referred to this as the sympathetic rubbing together of minds. All of the theatrical artists have an obligation to bring all of their skills (we never know what will be required of us) to the table when producing theater. He was always quick to include the audience in this experience. They want to be there. They’re rooting for us to do well.  It’s in their minds and imaginations that the final step in this creative process takes place.”

After graduating from the College, Robinson went on to be the theater director of the then-brand-new Footlight Players, “Charleston’s Little Theater.” Robinson more than doubled the membership in his first few years, but deflected any praise, saying that the theater was run by volunteers who not only acted, but also built scenery, managed the lights and sounds, sewed costumes and sold tickets. In 1938, Footlight Players and Carolina Art Association (now known as the Gibbes Museum) merged to take over the Dock Street Theatre, and Robinson stepped in to direct, working closely with the resident playwright Dubose Heyward (author of Porgy and Bess).

Determined to better serve community theater, Robinson applied to Yale University’s Department of Drama M.F.A. program. In his application he wrote, “I have found that a ‘little theater director’ must know every phase of the theater, and if his responsibility is one of developing the material in his community, he must be equipped to do so.”

Robinson believed that a community theater should reflect the manners and mores of the community, serving as an articulate voice for that particular audience. New ideas and concepts should be introduced, “not to shock or intimidate, but to inform, to entertain, to touch.”

Returning to Charleston with his M.F.A., Robinson threw himself back into the Little Theater, where he served as director until he retired in 1977. His daughter remembers a childhood that blended traditional, conservative Charleston customs with the marvelous fantasy of community theater. Her mother Patricia was a poet and playwright who often acted in the shows, which is why, when another actress dropped out of The Lady’s Not for Burning, a play set in the Middle Ages, Robinson promised his wife – who was pregnant with Jennet at the time – that he would alter the restrictive costume to hide the pregnancy if she would step into the role.

Robinson began teaching at the College in the 1960s – something that, according to his daughter, “lengthened his life.” To honor his many achievements and contributions to the College, in 1971, the College of Charleston awarded Robinson the Honorary Degree of Doctor of Letters, describing him as a “present day reincarnation of the versatility of a Renaissance man.” 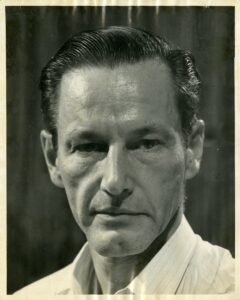 Robinson’s legacy continues on through the lives of the Emmett Robinson Memorial Scholarship in Theatre recipients.

“Being awarded the Emmett Robinson Scholarship was perhaps the greatest honor of my career at CofC,” says Michael Smallwood ’09, who is now an actor, podcaster, critic, award-winning playwright and filmmaker. “That stage means so much to every artist who passes through the CofC theatre department. I was eventually married on that stage – that’s how much that space meant to me. It’s the highest achievement professors can bestow upon you. It marks you as not just an exceptional student, but an ambassador of the department. And so for me, it was and continues to be this great motivator. Receiving the scholarship boosted my desire to prove myself as the best of the best.”