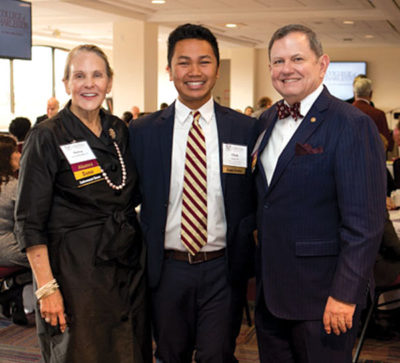 For Chak Or ’19, studying abroad in Cambodia was more than seeing another part of the world: It was about reconnecting with his roots and walking the grounds of the country his parents fled.

In the late 1970s, Or’s parents fled the Khmer Rouge, a Communist regime that took control of Cambodia for almost four years and was responsible for the deaths of an estimated two million people.

In the summer of 2017, Or visited his parents’ homeland as part of the College’s study-abroad program to Cambodia and Vietnam.

“I had the opportunity to reconnect with my culture, and it’s something I don’t think most people have the opportunity to do,” says the recipient of the Dr. Sam and Nancy Stafford Endowed Alumni Scholarship. “I wouldn’t have been able to do that without going on this trip.”

While in Cambodia, the elementary education major and political science minor met an uncle for the first time, worked with local children and conducted research that connected his areas of study. Or – a member of the College’s Call Me MISTER Program, which supports minority students majoring in education – believes the experience will positively impact his future as an educator.

“I want to be transparent with my students and let them learn about who I am,” explains Or. “I will be able to bring my culture into the classroom and hopefully engage students in conversation about culture and the importance of how our community values – and needs – a variety of cultures. It’s important for students to be aware of multiculturalism as well as learn the concept of cultural sensitivity because it can affect how they treat each other.”

One of Or’s biggest takeaways from his trip was learning the importance of self-reflection and fully embracing who he is.

“My first name is Chakadasovavan, and I used to hate telling people that was my first name because it was so different,” Or says. “But now I have come to realize that my name is a part of my cultural identity, and I have fully embraced it.”  – Braelyn Diamond