One thing Jack Watson ‘24, knows for certain is that he is going to be working in the international arena.

“I knew I wanted a small to medium school in a city with cultural events and an international focus,” says Watson, who grew up in Newburgh, Indiana. “CofC proved to be a great fit and my intimate glance at the College during interview weekend made my decision clear.” 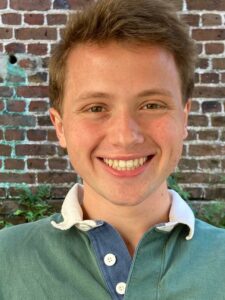 It also helped that his best friend in high school, Emily Dombrowski ‘23, was already at the College of Charleston together with two other high school classmates. Watson spent time with Dombrowski and her roommate, Grace Kern ‘23, who happened to be in the International Scholars program, which is part of the Honors College.

“I was so excited seeing her write in and speak Arabic, and I knew then that the community of language learning at CofC had a place for me,” says Watson.

“I liked the diversity of the students in the International Scholars program,” adds the recipient of the Swanson Family Annual Scholarship. “During the interview session, I saw the other people interviewing and knew this was the right cohort to join. With so many interesting people, I knew the program would help me grow personally and professionally. I also liked that the cohort is only 10 students because I knew I would get personalized attention.”

It also didn’t hurt that the International Scholars program has numerous study abroad and other international opportunities, and for the Midwesterner, living in Charleston was like a mini study abroad experience all by itself.

The sophomore has embraced all the opportunities presented to him through the International Scholars program as well as the Global Ambassadors program, which has a focus on international service. During summer 2022, he will intern with the U.S. Embassy in Bern, Switzerland where he will focus on refugee migration. Afterwards, he will travel to Greece for his International Scholar cohort experience to learn about the Mediterranean.

In fall 2022, he will attend a school at the University of La Rochelle in France to further hone his French skills. And in spring 2023, inspired by Kern, he will attend the American University in Cairo — his first year at CofC, he started studying Arabic so that he would be ready.

Where Watson will land upon graduation is unknown, but with the breadth of international experience he is gathering at the College he will definitely be making an impact on a global scale.