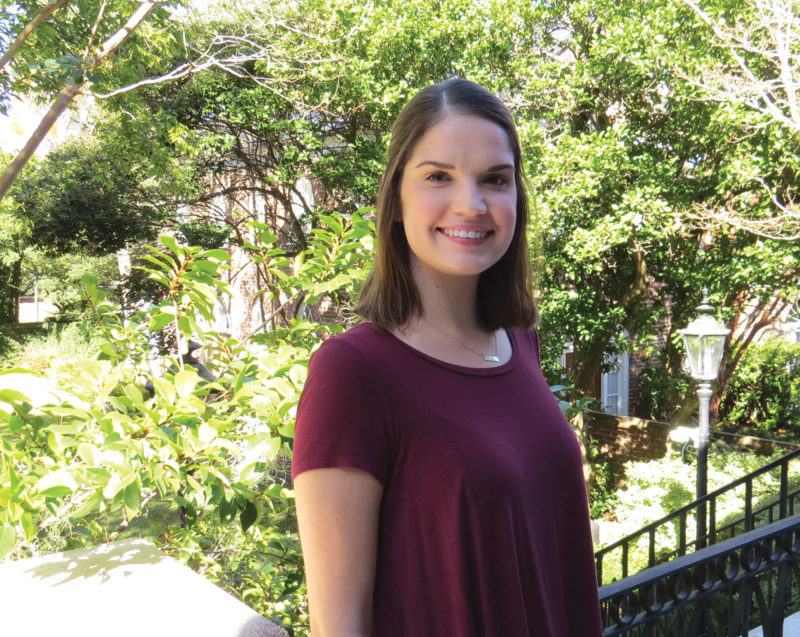 The Croghan name is famous for its namesake jewelry store on King Street, which opened more than a century ago, but perhaps the most valuable heirloom passed down from generation to generation is the education many of the family members have received at the College.

The next Croghan to graduate will be Lauren Croghan ’20, whose grandfather’s uncle started the store. Her dad, Daniel, graduated from CofC in 1989. Being close to her family was a big reason why Lauren chose CofC.

“It’s nice to come home on the weekends and spend time with my family, so I wanted to stay local,” says Lauren. “I also enjoy being downtown in the center of everything.”

“For the past five years I’ve been a swim coach on the swim team that I grew up on,” she says. “To be able to see the kids learn new strokes and be comfortable in the water made me realize that I really love teaching kids. I hope to transfer that excitement of learning into the classroom.”

During her junior year, Lauren received the Karen Burroughs Jones ’74 Alumni Scholarship, and this year is receiving the Student Alumni Associates (SAA) Scholarship.

Karen Jones, director of alumni communications and executive secretary for the Alumni Association, is very pleased that Lauren is the first recipient of the scholarship created in her name.

“Lauren is an extremely hardworking young woman who is preparing for a career in teaching,” Jones says. “She has been a very active member of SAA and comes from a long line of College of Charleston alumni, which has instilled in her a deep love for our alma mater.”

“The scholarships really make me appreciative of the help that the donors are willing to give,” says Lauren. “They helped relieve some of the financial burden for my parents. I hope to go to grad school after I graduate, so I’m trying to save up for that as well, and the scholarships have been a big help.”

In addition to her love of attending Cougar basketball games, one of Lauren’s favorite moments at the College is marshaling the graduation ceremony as an SAA member. “It’s such an iconic moment in the Cistern Yard,” she says.

Of course, she won’t be able to marshal next May since she’ll be crossing the Cistern herself, becoming another Croghan to graduate and proving that education is the most valuable treasure there is.  – Tom Cunneff